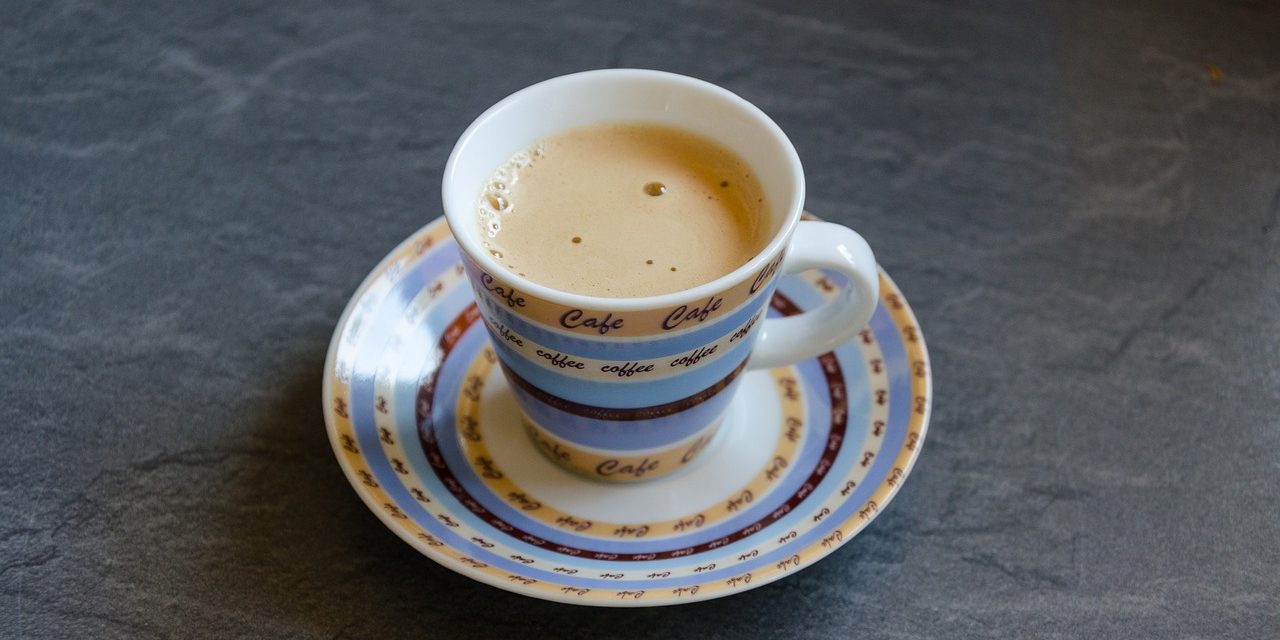 Coffee is a language in itself.

My first experience with coffee, real coffee, came at 17 near a little place in North Carolina called Snow Camp North Carolina. Up until that point all I had experienced was Kansas diner coffee and IGA brand instant.  My brother was artistic director of an outdoor drama called “The Sword of Peace” and he hired his very young and very recently graduated little brother to be an actor-tech. For those who have done summer stock theater, you know that this designation…”actor-tech”…is paramount to indentured servitude. In my case it meant, in no particular order: playing guitar for several hours a day, walking on during crowd scenes, being part of the lighting crew, working in the costume shop, and dying on center stage at the beginning of a battle scene, then sucking up the dust of horses, costumed soldiers, town’s folk, pyrotechnic smoke and a donkey, while the “battle” raged around me.

But I digress. We were talking about coffee. My brother, the same artistic director who sentenced me to eating dust for an entire battle scene, introduced me to chicory coffee (which almost forgives him for making me work in the costume shop). Chicory is a root that was used here in the states, beginning in the American Civil War, to extend coffee

Chicory is a plant in the dandelion family. And, like dandelion, is either considered a weed or great opportunity.

(although used in Europe for much longer). In a phrase, this was a desperation ploy. However, to paraphrase, desperation can be the mother of divinity and chicory coffee is indeed divine. When I first had it, it became an obsession. I was always on the lookout for my next chicory fix. This was back before coffee shops were on every corner. Diner coffee still ruled.

What chicory coffee did for me wasn’t shift my taste buds. Frankly, in Kansas there weren’t  many coffee options in the early 1980’s (blue can, red can, instant). What I was seeking was the experience of tasting that coffee. It was the tourist equivalent of buying a t-shirt, and every time I could have chicory coffee I would be right back at Snow Camp hanging out with my brother, doing summer stock theater, and yes, even sucking battle scene dust.

In between chicory coffee and my next coffee “ah-ha” was the submarine force. Coffee, by definition, wasn’t a drink but a necessity. Being stationed in Charleston I was able to find more palatable coffee than the light brown ground crud that constituted Navy coffee. And even after the Navy I was able to find higher end coffees. Still, it wasn’t until Tampa Florida that my coffee world once again cracked open.

It was in the famous Columbia Restaurant that I experienced the miracle that is Cuban Coffee. Yes, it is in essence sweetened espresso. Sitting at the Columbia eating that amazing salad, a genuine cuban sandwich, then finishing with a cuban coffee–and once again I wasn’t just drinking coffee; I was cementing a memory.

One of the cups purchased during a Cuban Coffee frenzy…

As my friends and I walked the streets of Tampa later that day we had something called a “cubano” in a local coffee shop. This was a cuban that used sweetened condensed milk instead of sugar as the sweetner. Talk about a miracle in a cup at two in the afternoon. I wanted seven…my friends limited me to one. They were wise in the ways of cuban coffee. Still, my jacked up, caffeinated brain lead me to buy my first stove top espresso maker, a “brick” of cuban coffee and little demitasse cups from a local resale store. Cuban coffee loosens wallets. I came home with the only useful souvenir I have ever bought on vacation. I will forever be in debt to my friend Lynnette and her husband Dave for starting me down the espresso path.

And the Young Shall Lead

In the first few days of opening The Bard’s Coffee one of our young baristas said he liked cortados. Being a grumpy owner (and overloaded with coffee terminology) I was not 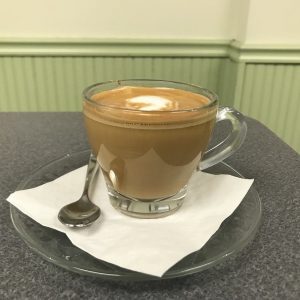 Cortados as an espresso pull “cut” with heated milk. The process dampens down the strength of the espresso while preserving the crema.

interested in learning yet another coffee drink. After all, I had barely figured out the difference between latte and cappuccino. However, Todd is a pleasant guy who’s enthusiasm far outweighed my opening business jitters. He produced what is now my favorite drink: The Cortado.

Cortado is the past participle of the spanish verb cotar meaning “to cut” and is a pull of espresso cut with an equal part of warm milk. For those of you who are espresso drink aficionados, the milk is only warmed and not textured or stretched. Like the cuban, cortados are espresso with just enough of a twist to smooth out the espresso pull but not dilute its potency or flavor. We would be happy to make you one and trust me, like chicory coffee and cubans, you too will have an “ah-ha”.

Living daily in a word of fantastic coffee I occasionally worry that I will become desensitized to the grandeur of coffee moments. I wonder if my daily brushes with coffee goodness will place its greatness beyond my reach. After all, I shouldn’t be greedy. I have touched coffee heaven three times in my life, more than I should expect and probably deserve.

Then, when we were perfecting our cold brew recipe, the feeling struck again. Where had cold brew been all my life? And, another ah-ha joined my coffee lexicon.

And so, I no longer worry. In just a few short weeks I have had two amazing coffee moments. And like any true believer, if I stay open to the divinity that is coffee, miracles will abound.

See you around the shop!